Much of our work is run-of-the-mill, but how do we go about solving those problem jobs that crop up occasionally.  Developing a procedure to solve unusual challenges will become even more important with the focus of training changing from the knowledge and understanding of pests to being able to show competency in management of only the most common pests.

A simplified procedure is:

RECORD CUSTOMER INFORMATION
INSPECTION
MORE DETAILED QUESTIONING OF CUSTOMER
IDENTIFICATION FROM PESTS OR EVIDENCE FOUND
FIND THE SOURCE OF THE INFESTATION
REFERENCES, UNDERSTANDING LIFE CYCLES AND HABITS
DISCUSS WITH OTHERS (ALSO ORGANIZES YOUR OWN THOUGHTS)
RISK ASSESSMENT – DO NOT TREAT UNLESS YOU IDENTIFY THE CAUSE
SELECT AN APPROPRIATE TREATMENT – NEVER USE PRODUCTS OFF-LABEL
IF APPLICABLE, INVOLVE YOUR CUSTOMER IN THE SOLUTION
SUB-CONTRACT TO ANOTHER MANAGER IF YOU NOT ABLE TO DO IT

When an unusual pest is encountered, there is most likely a limited source of the pest – no insects develop from spontaneous generation.  Thorough investigation (inspection and questioning) may be required to unearth the source.  Once this is found and treated the problem is normally solved.

Here are some recent experiences with some unusual fly and stored product pest management situations:

flies in the ICU of a major hospital

The fly was described as large with a grey and black striped thorax and grey/black checkerboard abdomen.  This is the description of the flesh fly (Sarcophagidae).  This fly lays live maggots in decaying flesh – not the fly you want in an ICU!  The windows of ICU did not open and there were many doors in the hospital to reach ICU.  The most probable source was a dead rodent or possum in the roof void with the flies accessing through the air conditioning or light vents.  The ceiling was suspended so it was not possible to inspect the roof void.

How would you treat this pest?

flies throughout a major hospital including operating theatres

Not the same hospital and a very different problem.  The surgeons refused to operate until the problem was fixed.  These flies were small and were identified as phorid and vinegar flies.

The phorid fly, also known as the scuttle fly, has black eyes and a severely arched or  hunched-back appearance because the head is tucked under the thorax.  Eggs may be laid in open wounds of patients in hospitals.  They are typically associated with advanced decaying organic matter.  They have heavy veins on the front margin of the front wing and are strong fliers, up to 10km in 24 hours.  They have a flattened hind femur (thigh to knee) and run rapidly and erratically across surfaces rather than take flight when disturbed.

The vinegar fly was also present.  It is also called the fruit (frit) and ferment fly.  It has distinctive large red eyes and a tan body with black stripes.  Adults live for 4 weeks – lay eggs in newly decaying fruit & vegetables, filthy mops, under garbage can liners, recycling bins, floor drains and in faeces.  The females lay 200 eggs with an 8-10 day life cycle.  They are attracted to sour odour of fermentation and bacterial waste.  They are commonly seen on damaged fruit in homes.  The adults drink nectar and other sugary solutions.

This was clearly a refuse management problem.  Large ‘wheelie’ bins without liners were taken into the hospital and when full were taken out the back into a pen.  The rubbish was removed every second day.  These empty bins were then taken back into the hospital – without being cleaned – to replace full bins placed in the pen.  The’juices’ at the bottom of the bins provided a perfect breeding environment for the flies – which were then transported to every part of the hospital in the ‘empty’ but not clean bins.  The empty bins in the pen were cleaned once a week – but an individual bin may miss being cleaned for months if it was in use when cleaning was done.

What would you recommend?

The owners of a six month old up-market restaurant were losing money and reputation.  Patrons eating near the bar area were complaining that flies were landing on their meal and demanded they not pay (even though they had finished it).  These flies had distinctive large red eyes – again the vinegar fly.  The flies were massed on the air conditioning vents above the bar in the restaurant and in the kitchen.

There were drains directly under the main areas of congregation of flies – in the bar and in the kitchen.

What would you do? 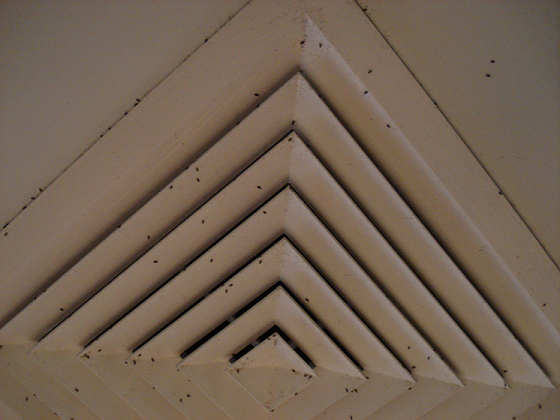 flies in the ICU of a major hospital

A glueboard UV light was placed in the roof space above the area.  PMT reported a thousand flies on the glueboard two days later.  This was so successful because the light was the sole source of light in the roof.  It also showed that only a few of the flies actually made it into ICU compatred to the numbers in the roof void.

flies throughout a major hospital including operating theatres

Solution: the first objective was to get the operating theatres back on line.  Sprays in theatres were not allowed so all bins were removed and traps and stickyboards with wasp and fly attractant were placed throughout the theatres.  It was recommended that the hospital change its rubbish removal system including a thorough wash out of the bins and use of liners.

In similar cases the major source of flies has been from sanitary bins in the ladies toilet.  In this case, the recommendations included that the bins be changed more regularly.

An inspection of the drains uncovered massive breeding areas.  The substrate (gunk) was an ideal breeding site for this fly.  Note the fly pupae under the lip of the kitchen drain.  The amazing thing with this one was the restaurant was only six months old.  The problem would have persisted if only the adult flies were targeted – in fact there was a timed release aerosol pointing directly at the flies above the bar.  The drains were physically cleaned.  They will then be treated monthly with a microbial such as BioPlus or Drain Force.